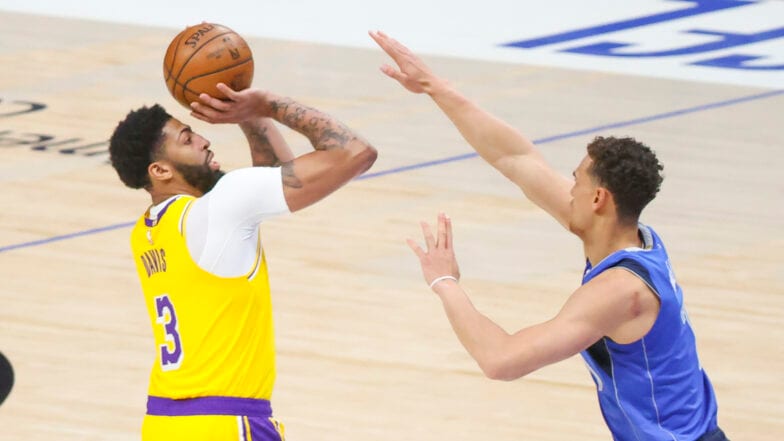 In his first game since Feb. 14, Anthony Davis scored 4 points on 2-for-10 shooting.

DALLAS (AP) — Anthony Davis was rusty in the return from the longest absence of the eight-time All-Star’s NBA career, scoring four points while missing eight of 10 shots in the first half against the Dallas Mavericks.

The Lakers star missed the previous 30 games with right calf and heel issues before starting the first of LA’s two consecutive games against the Mavericks on Thursday night.

Davis also missed two free throws while going 2-for-10 from the field. The big man settled for jumpers, but also couldn’t convert at the rim twice while playing nearly 17 minutes. Coach Frank Vogel said the plan was to play Davis about 15 minutes, all in the first half.

The Lakers are 14-16 since Davis last played, and the defending NBA champions are fifth in the Western Conference. LA started the night three games out of fourth place and home-court advantage in the first round of the playoffs.

The 28-year-old who’s in his ninth season has said he was worried about tearing his right Achilles tendon, which was part of the reason he was shut down and has been out for so long. The Lakers wanted to make sure their star was completely healthy.

Davis entered the game averaging 22.5 points and 8.4 rebounds per game. James has been out since March 20. The Lakers are 7-9 since both stars were sidelined.

After ref’s audio in Red Wings game, a watershed moment?